horse breeds
The Clydesdale horse is native to Scotland. It is a large draft horse, but it wasn`t at the beginning of its development 300 years ago. They passed over great changes through the history, used and bred by people for different purposes.

Scotland needed a horse that will be well suited to the harsh environment and can survive its climate. The Clydesdale origins are from the Clyde Valley Clydesdale area in Scotland. During the 18th century, local mares were crossed with the Flemish horse from South Africa, other English breeds and later Shire blood was also added. The goal was to improve and refine the existing breed for agriculture uses.

The most distinguishing characteristic of the breed is their feathering on the lower legs and they are also known for their size. That makes them easily recognizable. The average height is between 16.3-18 hands high. Some stallions can stand more than 18 hands and weigh over 1000 kg. The average weight of the Clydesdale horse is between 820-910 kg. Bay is the most common coat color that appears at the Clydesdale horse, but brown, chestnut, black, grey and roan can also occur.

They are often white underbelly and the feathers above the hooves are mostly white, although at black legs they are black. The Clydesdale has a beautiful, strong head with a straight or slightly convex profile. They have a broad forehead, eyes are bright and intelligent the ears are small and the muzzle is wide and sometimes can be white with black spots around the lips. The neck is long, crested and arched, withers are very high shoulders are sloping with heavy bone structure back is short and chest is deep.

The legs are long and well-formed, high-quality feet are rounded and hooves are striped, black and white. Initially, the Clydesdale horses were used as pack horses, for transport, pulling carts, draft, and forestry work. Queen Elizabeth was very impressed with the appearance of a colorful Clydesdale, which was pulling milk cart, that she pressed it into royal service like a drum carrier. In the past, they were used as war horse.

Today they are very popular at advertising, being Budweiser Beer Companys mascots for over 75 years. There were eight horses at the beginning and today there are five teams of amazingly beautiful Clydesdale horses with great size. All of them are bay with white feathering, trained and dressed up for shows and parades.

The Clydesdales are famous for their grace, high stepping leg action with a seemingly eager, active gait, giving an impression of quality and power. They have been influential, spreading its bloodlines worldwide, creating and improving many heavy breeds.

is one of our selected horse breeds games which can be played for free at horse-games.org. It has been rated from 583 visitors of horse-games.org with 4.65 stars out of 5. 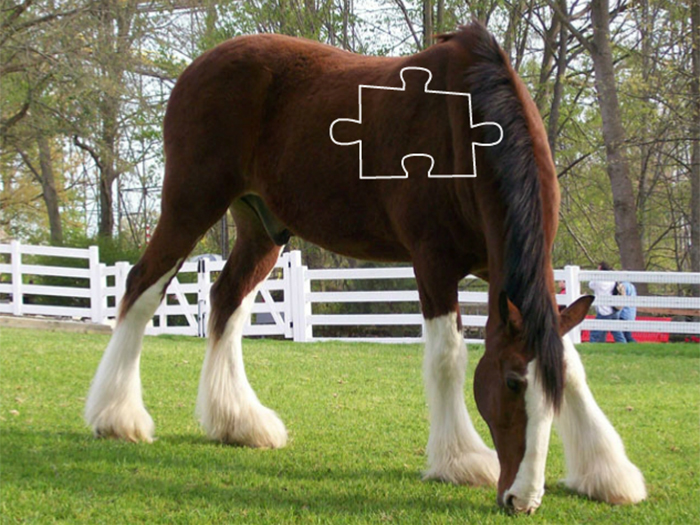 This includes the Irish and Australian Draft, Gypsy Vanner horse, Dales Pony etc. As the mechanization grew and horses were replaced with tractors, the number of the Clydesdale horses had declined significantly. Another reason for a huge decline in their population number was the wars and the use of heavy draft horses.

The first breed registry was created in 1877 and the first American stud book was published in 1882. During the 19th and 20th centuries, there were many exports throughout the world, especially in Australia and New Zealand, where it was widely bred and with 25000 registered horses they are called The Breed that built Australia. Other exports were in the United States, Canada, Japan, Germany, and South Africa. The Commonwealth Clydesdale Horse Society was established in 1918 in Australia.

In 1975 they were declared on the vulnerable list for survival with only 80 animals. In 1990 their number began to rise, but unfortunately, in 2010 they again were moved back to vulnerable from at-risk status. The Clydesdale is at risk for chronic progressive lymphedema, which has similar symptoms as at humans, with progressive swelling, hyperkeratosis, and fibrosis. Solve this horse puzzle of docile, brave, active, versatile and friendly horse breed. Replace the pieces of the jigsaw by using your mouse and see an image of a strong, bright and kind anima
So do not go anywhere, stay on horse-games.org and play thousand of free horse, pony and other animal games. More »