horse breeds
Cleveland Bay horse originated from England. It is an old horse breed that is developed in the Cleveland area of Yorkshire, in North East England and the only native horse of England that doesn`t belong to the heavy horse group, like the Shire, Clydesdale and Suffolk Punch. As a type, it resembles the Irish Draught horse, although they are completely unrelated.

The historical beginnings of the breed are from the medieval time when the churches and monasteries were breeding them in order to maintain a packhorse that is good for carrying goods from one to another monastery in northeast England. They got a nickname Chapman Horse by the traveling people that trade goods to earn a profit, known as chapmen. Chapmen mares were crossed with Barb horses, brought from France and Andalusian horses that were bred in the royal stud in Cordoba, Spain.

That was the development of what is now the original Cleveland Bay. These crossbreeding were made during the period between 1685 and 1785 and the type grew bigger, heavier and more draft-like than the today`s Cleveland Bay. The confirmation of the breed was excellent for the agriculture needs, where strength on farms was required more than speed. Later things have changed, hence a need for a faster horse increased, thus the existing Cleveland Bay was crossed with Thoroughbred and Arabian bloodlines.

The result was a horse suited for transportation and mostly used as coach horses. Physically they were lighter and faster, but at the same time strong and heavy in bone with powerful shoulders and well-arched neck. The Cleveland Bay has a large, bold head with slightly convex profile set on a long, well arched and muscled neck. The eyes are large and well set. The withers are well muscled and the chest is deep and wide. Legs are clean, short, but muscular and strong with large knees and hocks.

The lower legs have no or little feather because the breed was developed for work in the heavy clay soils and heavy feather led to diseases. The body is deep and wide the croup is slightly sloping and shoulders are deeply muscled and slopping. The feet are excellent with flat cannon bones and must be blue in color, large and sound. All Cleveland Bay must be bay in color as they gain their name. The most desirable are the reddish, but ordinary bay, dark and light bay are also accepted. Grayish hairs in the mane and tail are considered to be a characteristic for pureblood horse.

On the other hand, white markings are not allowed and those horses can`t be registered in the stud book, except if they have a small star on the forehead. A purebred Cleveland Bay has black points, although horses with red below the knees and hocks are not disqualified from registration. This characteristic appears when a Cleveland Bay mare is crossed with a chestnut Thoroughbred stallion.

At the beginning of their development they always had a counter-shaded dorsal stripe, but during the 18th century when other blood was added to the breed it disappeared. The Cleveland Bay is a tall horse and its average height is between 16- 17 hands high. They can weigh between 550- 680 kg. The Cleveland Bay horse has a long lifespan.

Despite the physical features in the breed standards, a new section was added that judged the horse on their abilities of movements, especially at the trot. Horses that have a good trot are also potential good jumpers.

is one of our selected horse breeds games which can be played for free at horse-games.org. It has been rated from 528 visitors of horse-games.org with 4.65 stars out of 5. 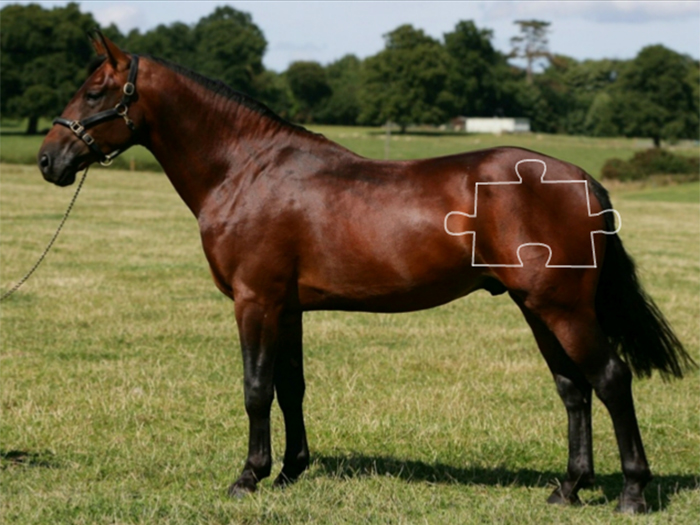 Crossbreeds with the Thoroughbred made a special section in the stud book for part bred, also known as a sport horse. These are good show jumpers, eventers, and steeplechasers. The rise of the mechanization, the appearance of the automobile and the uses of these horses in the World War I and II led to a dramatically decline of the breed.

The British Cleveland Bay Horse Society was established in 1883 and one year later was published the first stud book. During the 19th century, many Cleveland Bays were exported from England to the USA, Australia, New Zealand, South Africa, India, Russia, and Europe. Each country has formed its own Society and they all agree that the status of the breed is critical with 550 Cleveland Bay alive worldwide, of which 220 are mares. Queen Elizabeth II had a great role in saving the breed in England. She was a patron of the Society and in 1984 acted as its president.

The Cleveland Bay is used as shown, police and riding horse, for driving, fox hunting, able to carry a man weighing 110 kg all day and jumping over difficult obstacles. They competed in show jumping in the 1964 Tokyo Olympics, in 1968 Mexico City Olympics and in the 1976 Montreal Olympics in Canada. Many Cleveland Bays are used worldwide to improve other breeds by crossbreeding.
So do not go anywhere, stay on horse-games.org and play thousand of free horse, pony and other animal games. More »